From its desert landscapes to the impressive architecture in its cities, Uzbekistan is a country filled with scenic wonders and astonishing cultural riches.

Located in central Asia, Uzbekistan is a former Soviet republic bordered by five countries; Kazakhstan to the west and north, Tajikistan and Kyrgyzstan to the east, and Afghanistan and Turkmenistan to the south. For centuries, this was one of key meeting points along the Silk Road between Europe and China, and any Uzbekistan tour will be filled with the historic sights of ancient cities and insights into a culture that flourished for thousands of years.

Uzbekistan’s sprawling capital city, Tashkent, is an extraordinary labyrinth of museums and bazaars, and also the largest city in Central Asia. Explore the Khast-Imam complex in the religious centre of the city, with its ancient mausoleums. While there, be sure to visit the Tellya-Sheykh Mosque, where you’ll see the oldest Quran in existence, the world-famous Samarkand Kufic Quran, originally written on leather in the Seventh Century. Learn more about the history of Uzbekistan and its traditions at the History Museum of the People of Uzbekistan, or perhaps immerse yourself in the present-day culture of Uzbekistan in the open-air Chorsu Bazaar.

Other highlights of Uzbekistan include the mud-walled, blue-tiled Silk Road trading city of Khiva (now a sleepy oasis welcoming visitors to its mosques, mausoleums, ornate madrasahs and ancient markets), the three-millennia-old city of Bukhara, Shahrisabz (birthplace of the great nomadic conqueror, Tamerlane), the ever-shifting red desert sands Kyzyl Kum and – of course – the iconic city of Samarkand.

Tour Uzbekistan with us and discover the Silk Road on a truly extraordinary journey through a land steeped in history and tradition.

Discover the Silk Road on a truly extraordinary journey through Uzbekistan with us on one of our tours.

THINGS TO SEE IN UZBEKISTAN 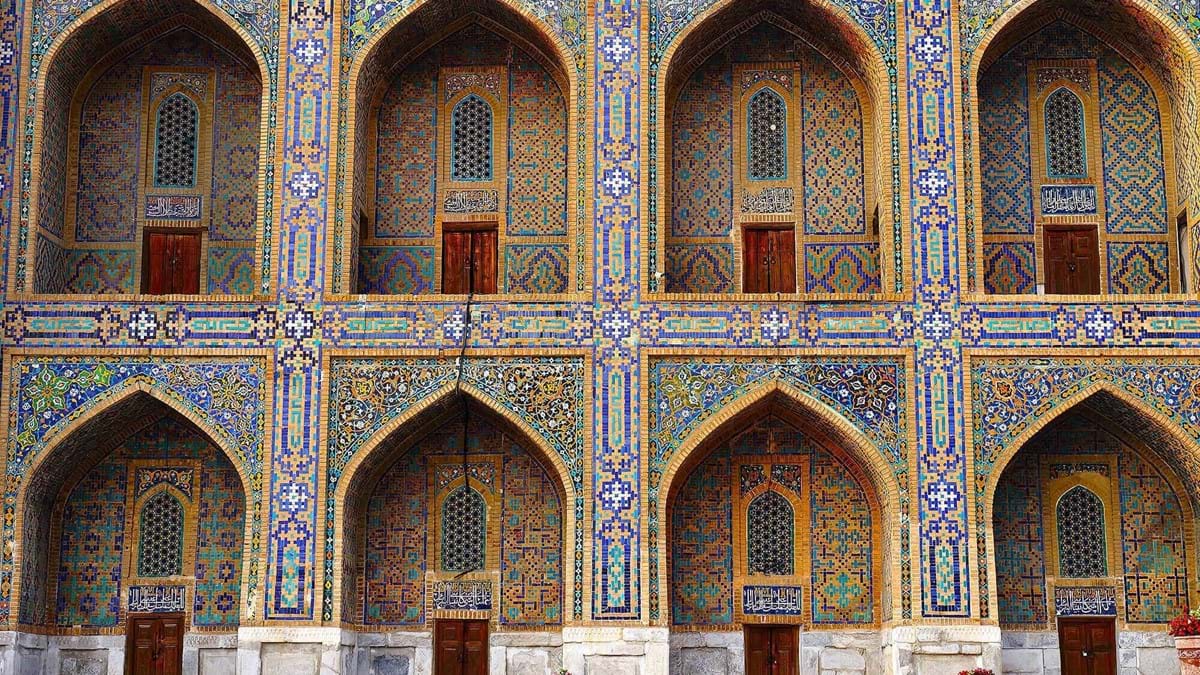 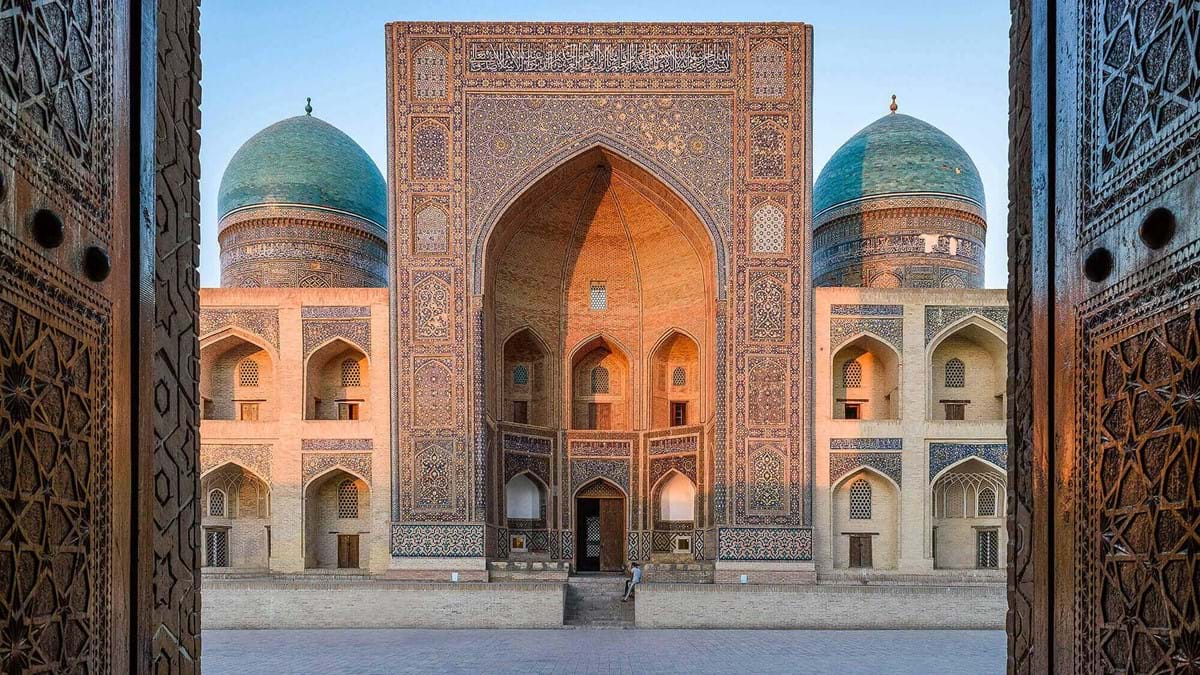 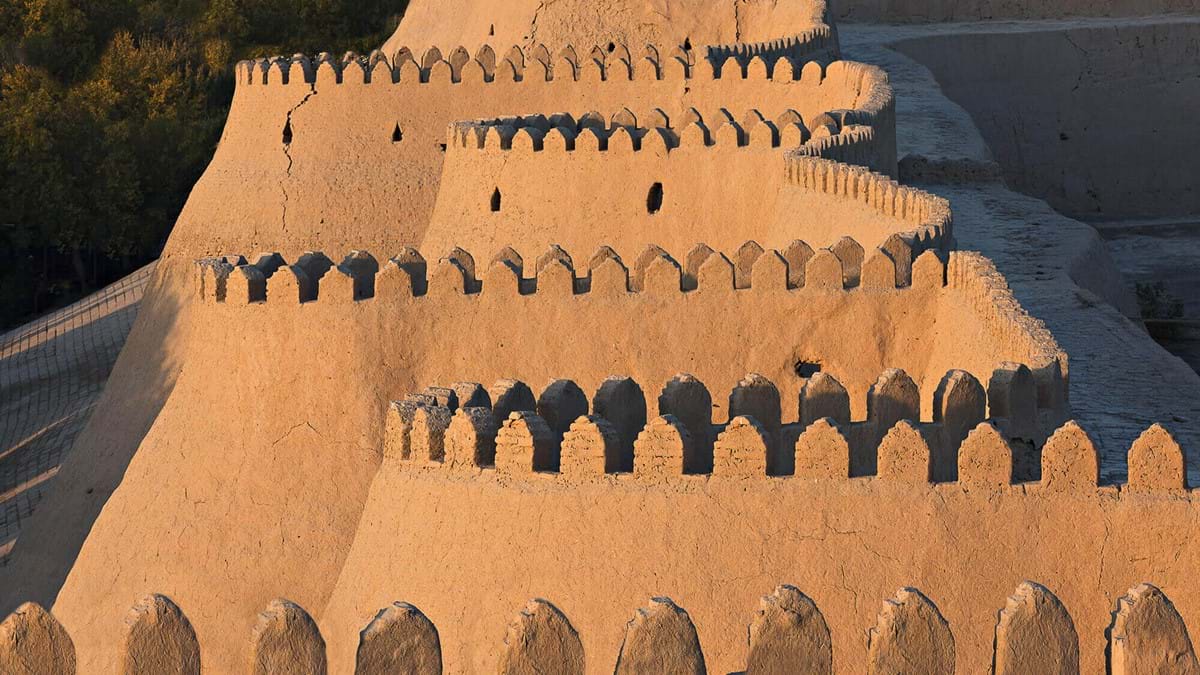 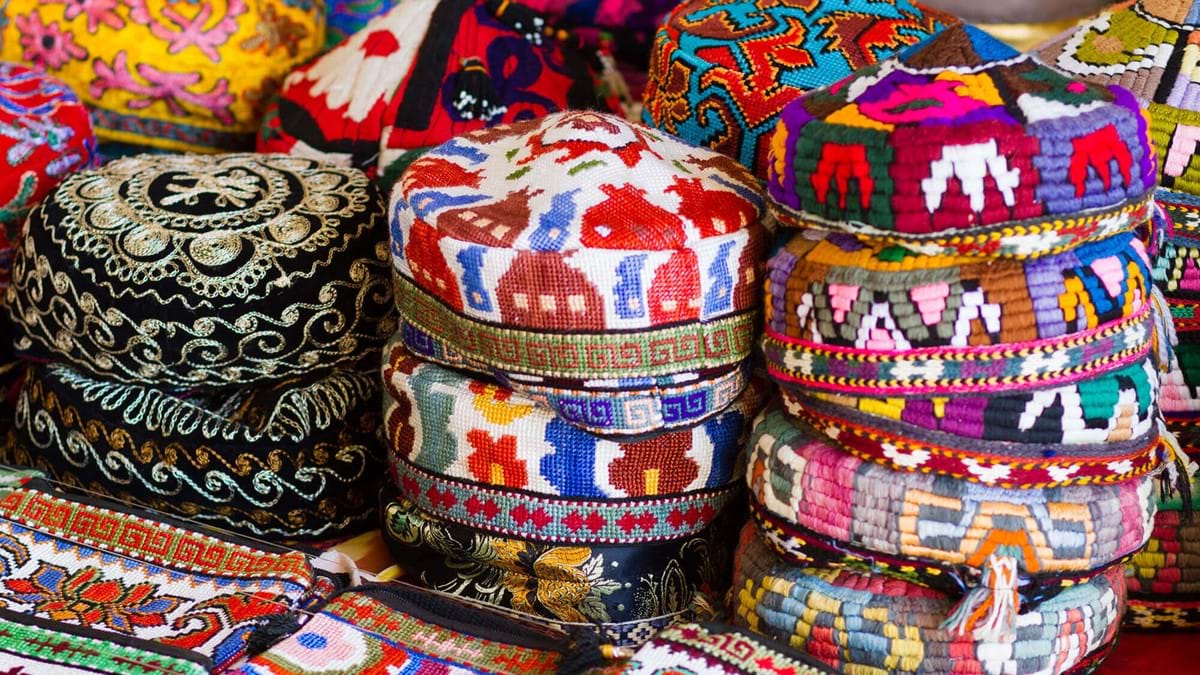 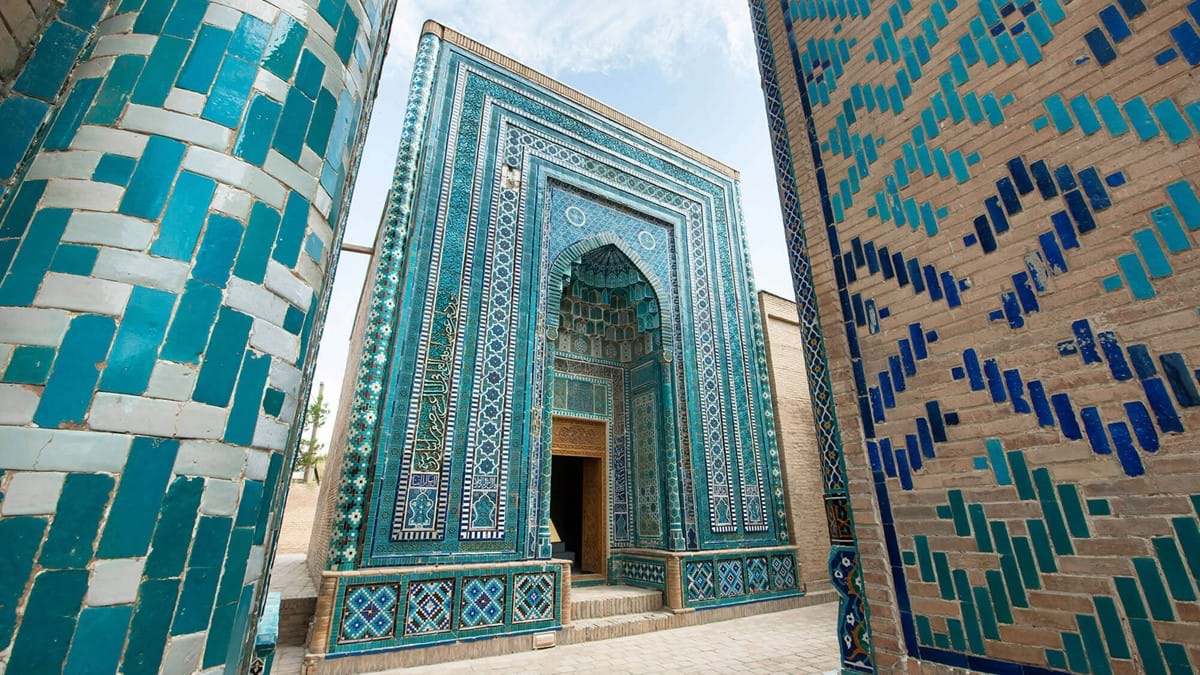 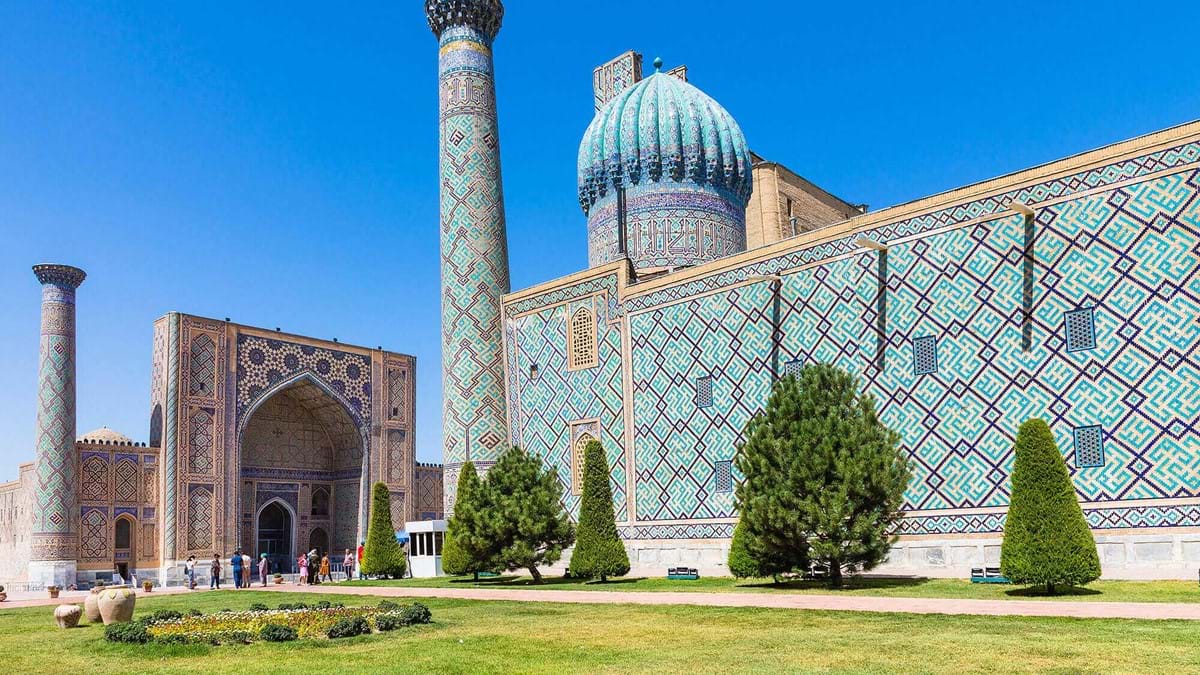 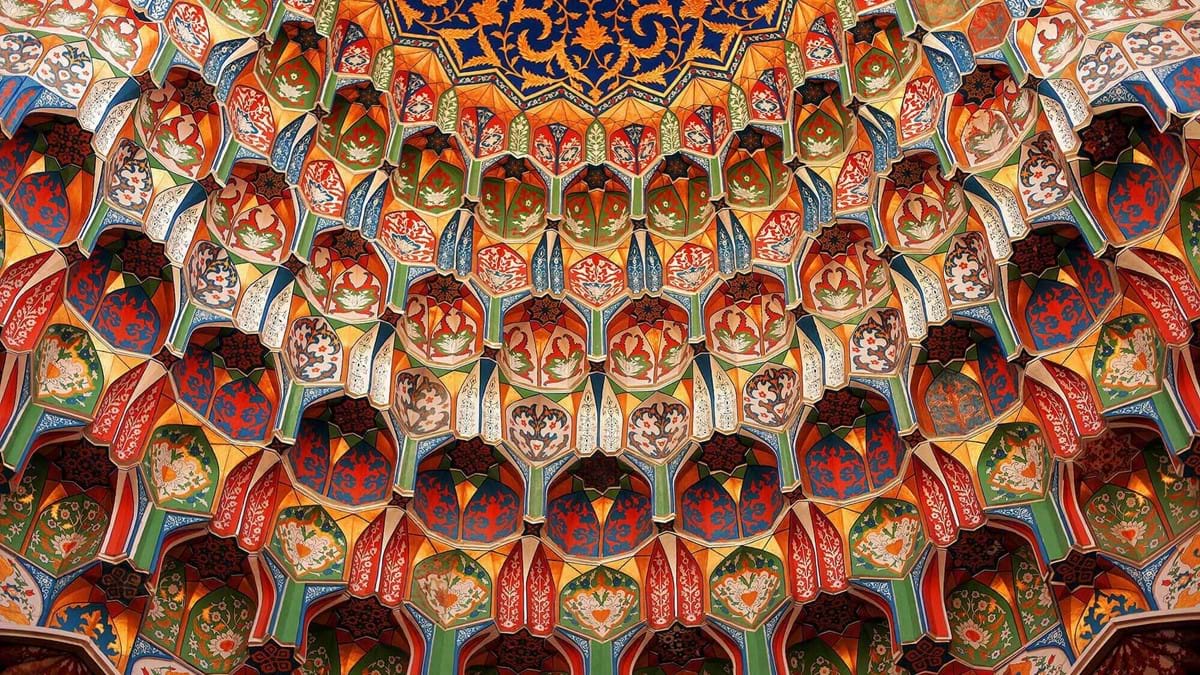 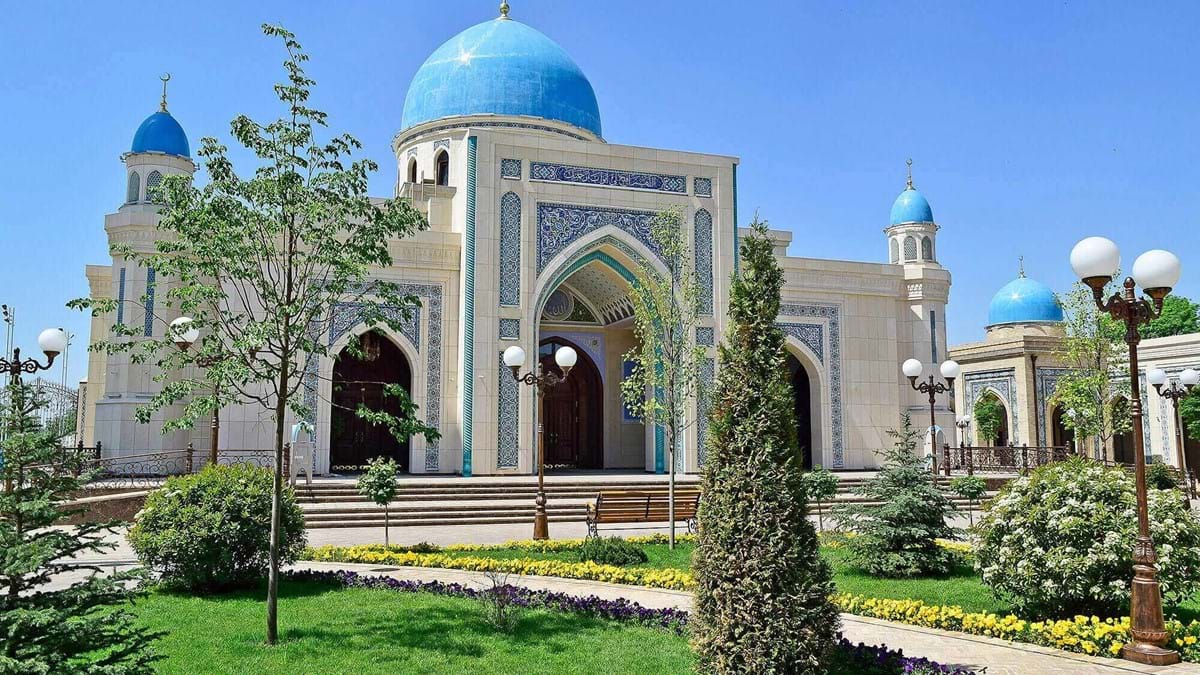 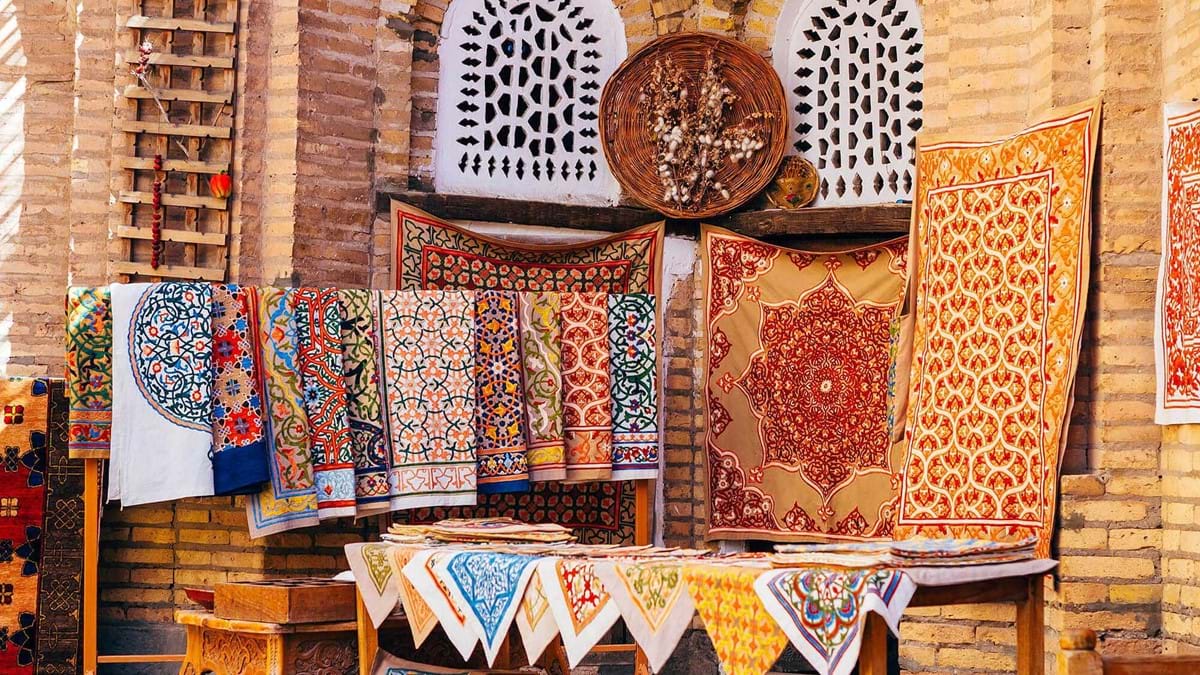 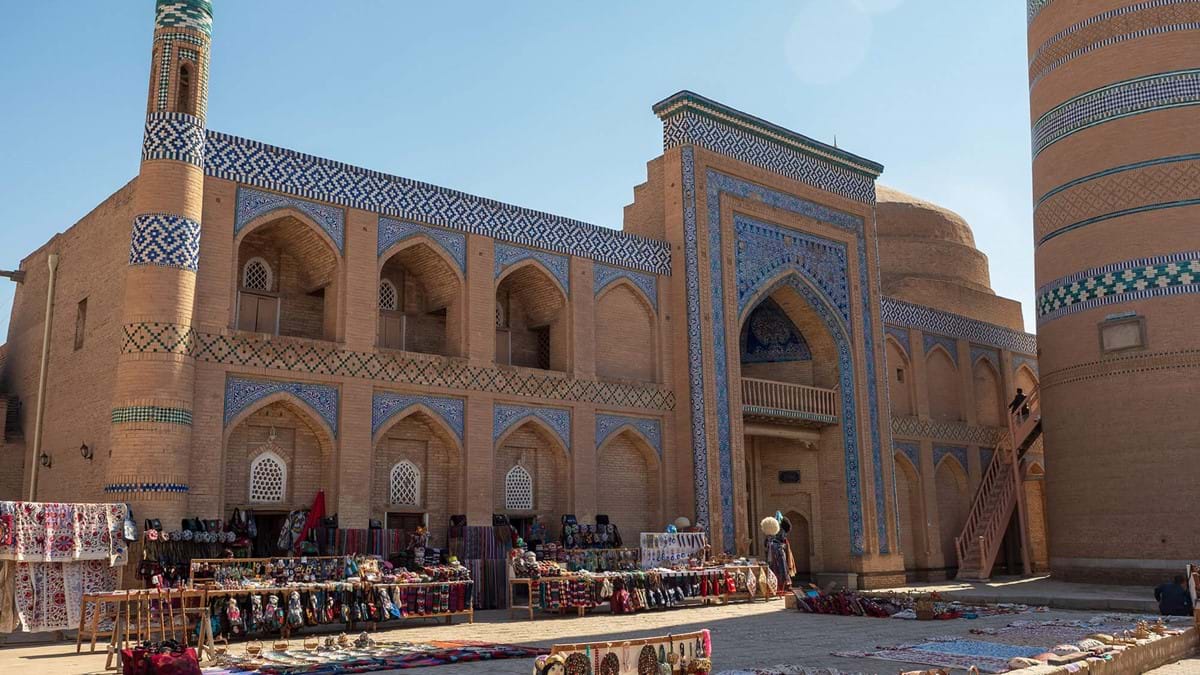 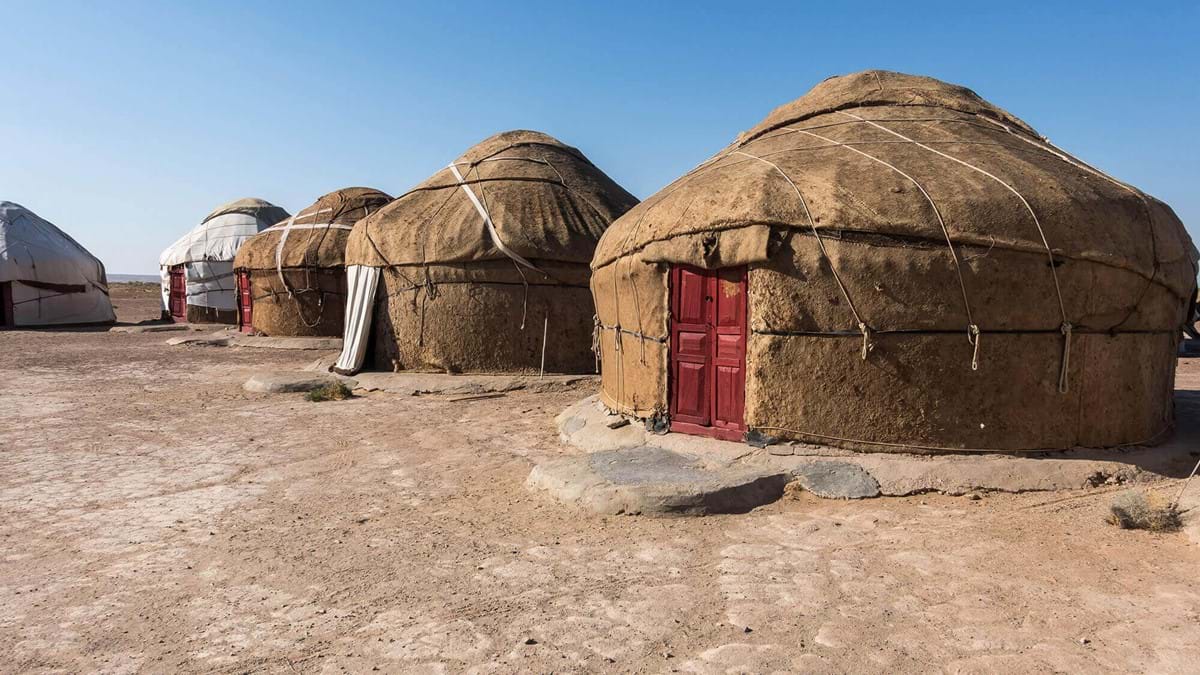 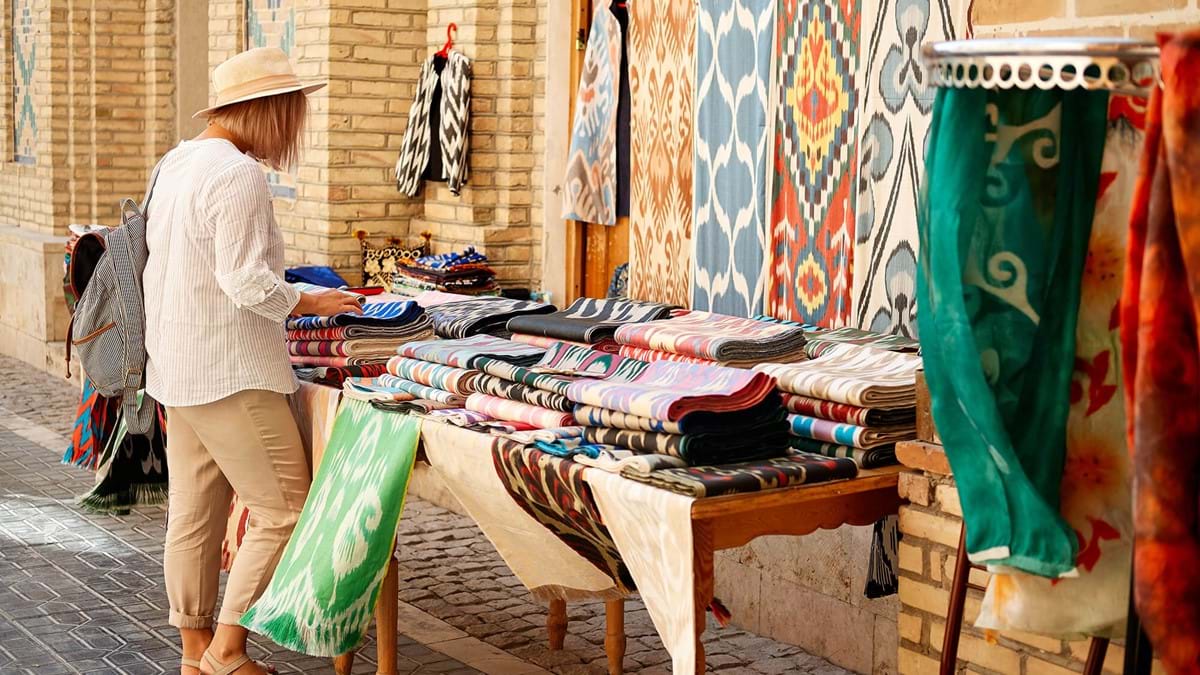 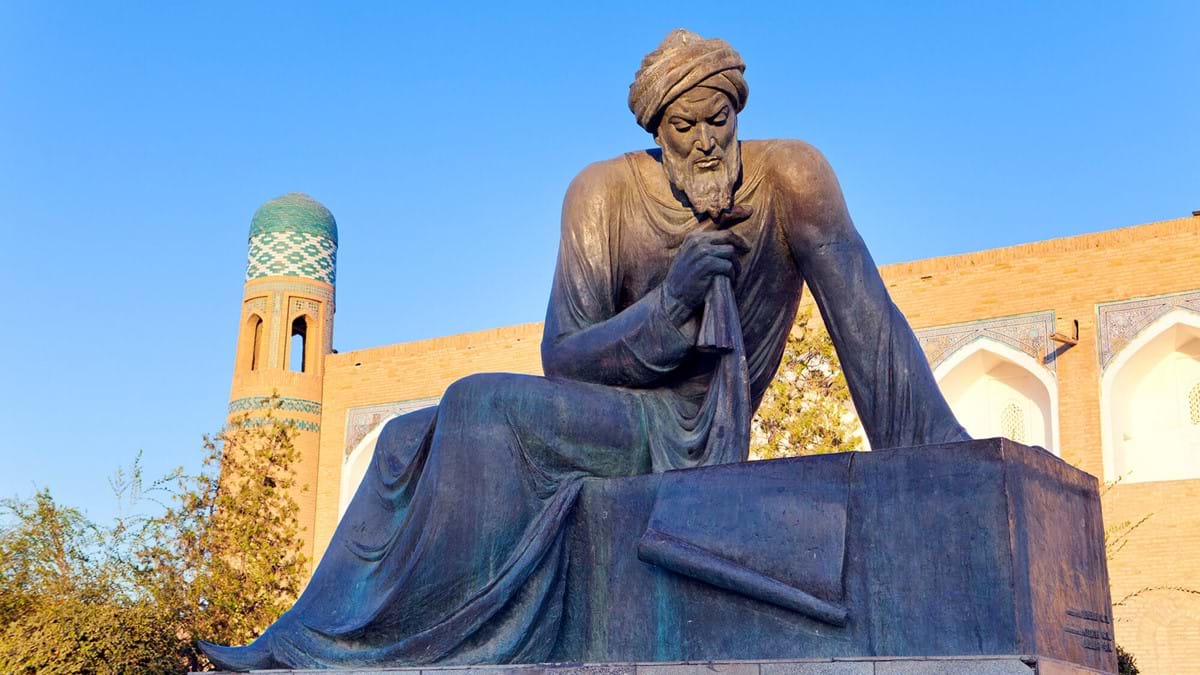 THINGS TO DO IN UZBEKISTAN

Rich with history and impressive architecture, Uzbekistan is full of wonders waiting to be discovered. There is plenty to see and do in this country, and here are three highlights to add to your list of must-dos on your holiday in Uzbekistan. 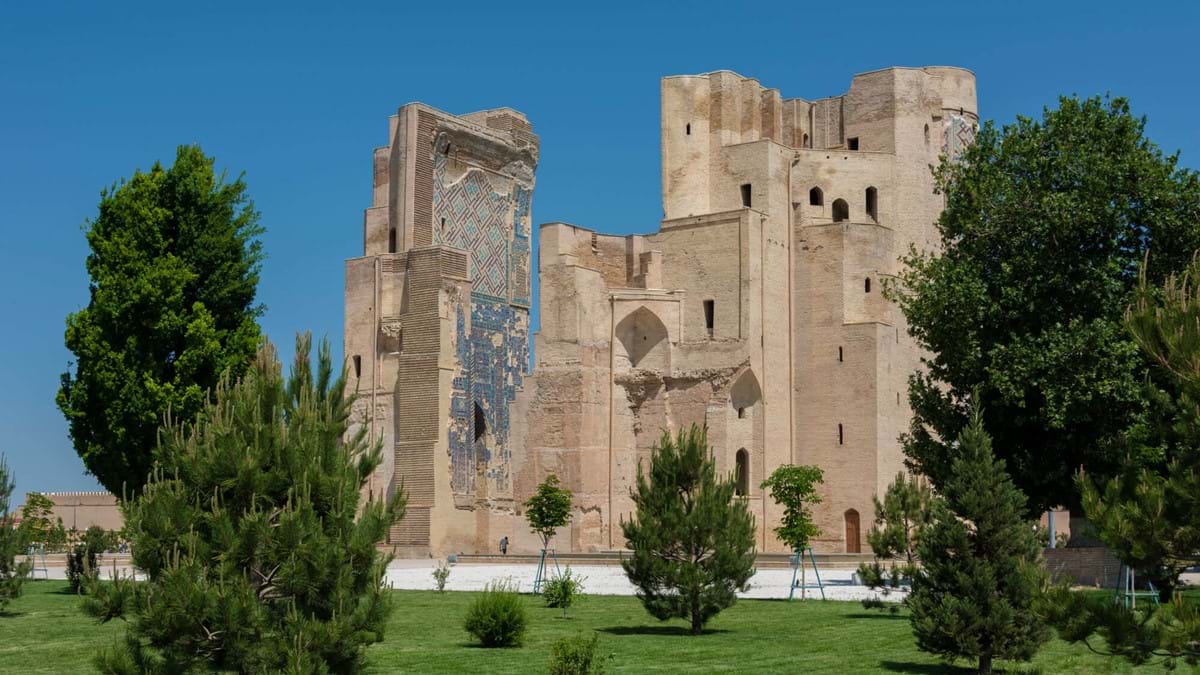 Visit the ancient city of Shahrisabz, known as the birthplace of the great Tamerlane. See the city’s grand architectural buildings, including the Kok Gumbaz mosque, the grand Ak-Saray palace, and the mausoleums of Dorus Saodat. 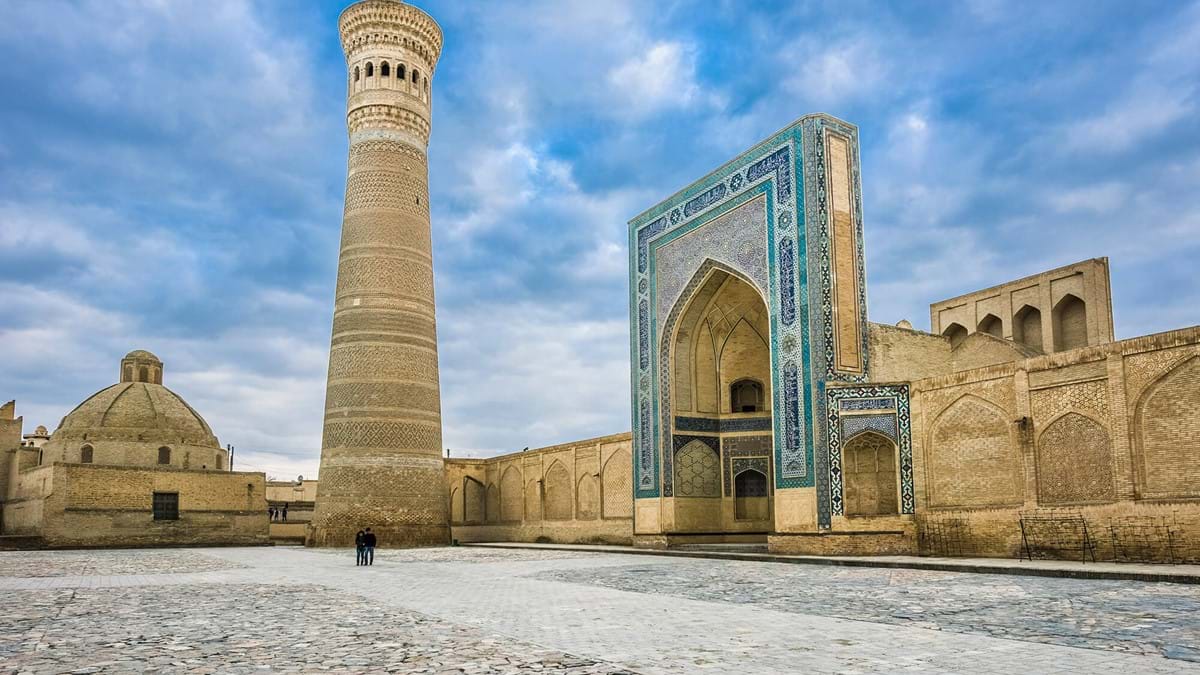 Cross the mysterious red desert of Kyzyl Kum to holy Bukhara where you’ll discover thousands of years of history in the city’s ancient streets. Discover its historic fortress, the Ark of Bukhara, and explore its museums and restored royal apartments. See the 1,100-year-old mausoleum of the Samanid dynasty rulers, and the incredible 150ft-tall Kalon Minaret.

Journey to Samarkand and explore Tamerlane’s great capital. Here you the unmissable highlights include majestic Registan Square, with its monumental, ornately decorated madrasahs, and take in the astonishing Gur-e-Emir, Taqmerlane’s family mausoleum.

Uzbek cuisine take influences from Central Asia and Russia, with local agriculture such as grain farming, bread and noodles playing an important role in Uzbek gastronomy.

Plov is the country’s national dish, often made with rice, meat, onions and carrots, and cooked over an open fire. Other ingredients such as raisins and fruit may be added, and the end result is somewhere between a pilaf and a biryani. Kebabs are also served as a main course – with tandir kabob (mutton prepared in the tandir oven) being the most popular. Be sure to try shurpa – a savoury soup made with mutton and vegetables.

Uzbek cuisine is very ‘noodle-rich’, with plenty of noodle-based dishes that may be served as a soup or a main course, such as norin, noodle soup dish with lamp, and laghman, a dish of pulled noodles, meat, and vegetables.

In addition to Central Asian foods and Russian specialities, expect to find western-style restaurants in the larger cities, an cafés and coffee shops in abundance.

Green tea is Uzbekistan’s national hot drink – and you should definitely consider a visit to an Uzbek chaykhana (teahouse) for a truly authentic dining experience.