RIVER CRUISES ALONG THE MOSELLE

Branching off from the much-heralded Rhine, the peaceful tributary of the Moselle is a postcard-worthy view of romance, wine and life during another time.

The Moselle River weaves its way through France, Luxembourg, and Germany.  As such, river cruises along the Moselle offer a unique opportunity to experience these destinations at a gentler pace. Rather than traversing the three, trying to fit everything in alongside crowds of travellers, a river cruise on the Moselle allows you to visit these countries with ease. Sail beneath historical bridges, while watching the forested plateaus transform into vibrant green hills and medieval villages.

The river’s 339 miles have experienced dynamic change over the years. Having been repeatedly transferred between French and German control, the Moselle has been the site of multiple battles and monuments.

On a more leisurely note, the river is a historic haven for wine-lovers. The notable wine-producing region of Moselle is located where the river enters Germany and streams past Trier – home to eight of Germany’s 39 protected UNESCO sites – to its confluence with the Rhine at Koblenz. The cool northern European location means Riesling grapes thrive here. The river also plays a practical role in viticulture, with the water reflecting sunlight onto the vineyards, aiding the growth of the grapes.

Before reaching its confluence with the Rhine, the Moselle flows past colourful castles of varying ages – some ancient and some more recent 16th century constructions. One highlight is the 12th-century hill-top castle of Cochem, a stronghold once destroyed by French King Louis XIV's troops.

Cruising along the Moselle is the ultimate antidote to exploring more touristic regions, with the river moseying through charming towns free from the typical commercial trimmings.

Join us on an A-ROSA river cruise and discover the Moselle. 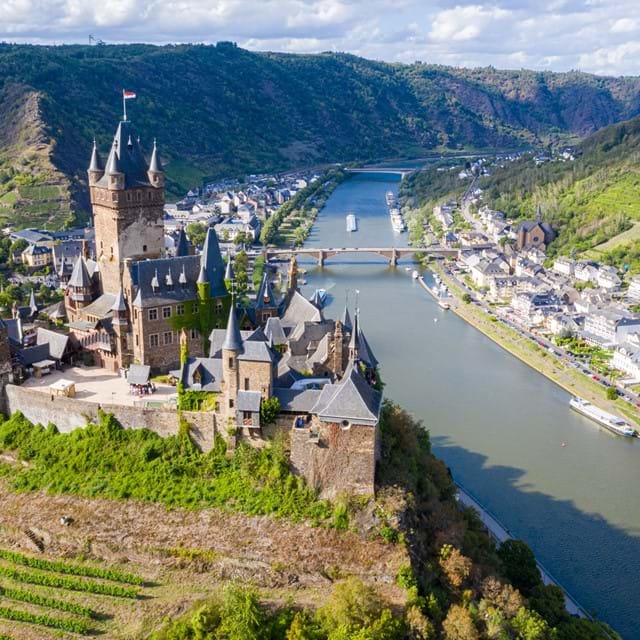